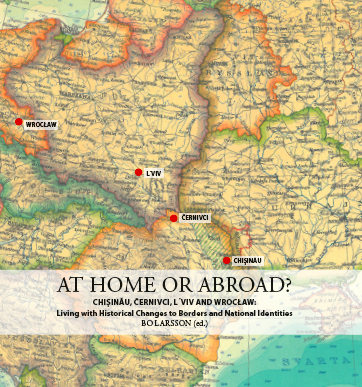 At Home or Abroad?Chişinău, Černivci, L’viv and Wrocław: Living with Historical Changes to Borders and National Identities

This is is a book about four cities who were several times, and especially in connection with World war II forcedly put into completely new national contexts (“moved between the countries”). This was affected by coercion from outside. The changes included genocide and forced displacement, but preserved built environment testifies past populations and national contexts.  is book describes the urban environment in the four cities before World War II, and how the present population handles the memories of the past for future development.

In connection with World War II and its aftermaths, many of the four cities Chisinău, Černivci, L’viv and Wrocław residents were either killed or subject to forced migration beyond the new national borders. People settled in the city environment which still bore the traces of the earlier population and the earlier urban life that had been brutally put to an end. This book summarizes the findings of a research project investigating changes in the urban environment in these cities during and after World War II, and the post-war knowledge and attitudes concerning the built heritage, especially in urban planning and development.

Each of the four cities is examined in the inter-war urban environment in its historical context, the events during and after World War II, urban planning and treatment of pre-war heritage in the post-war socialist period and the attitudes to and the handling of memories and cultural heritage in urban development and planning in the post-socialist era. The book also makes comparisons between the four cities.

The authors are partly researchers from the cities studied, partly from Sweden and Germany.